skip to main | skip to sidebar

A DIY Project Outside

We've gone a little crazy on our home improvement project lately...
We have a long driveway that stretches along the side of the house to the garage at the back of our lot. Between the driveway and the house there is a row of bushes. The driveway is large enough for two cars to park but not to park and be able to exit the car that is parked on the left of the driveway without crawling through the bushes. 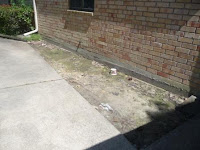 We pulled the bushes out a few months ago and got several quotes for concrete and landscaping before finally deciding to do it ourselves.
(It takes a little elbow grease but it's a heck of a lot cheaper)
We finally bit the bullet this weekend and decided to fill in the dirt patch that had become an eyesore. 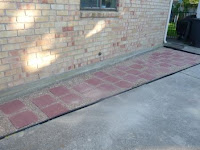 After three trips to Home Depot we had laid sand, paving stones and river rock into our little driveway extension. While it's not 100% just yet Brian will at least be able to walk to the backdoor without stepping in mud or crawling through bushes.
Posted by Amanda at 8:28 PM

Amanda
Houston, Texas
I am a wife, mother, daughter, sister, grandchild, aunt, cousin, niece and friend. I have been married to my wonderful husband Brian for seven years. We have two adorable boys. Camden, our energetic and funny four year old and Deegan, who is our quiet yet daring one year old.